Today we welcome back our popular guest writer, Renée Mineart. 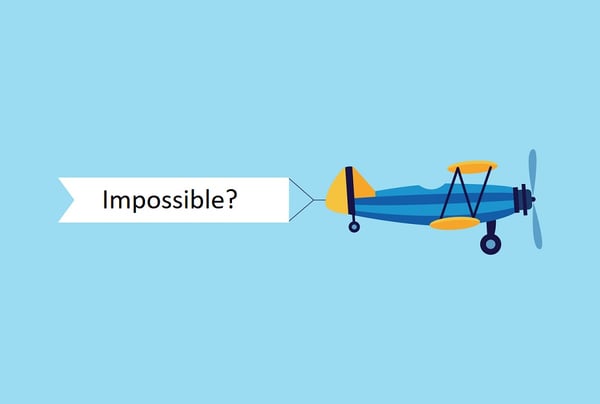 The definition of Impossible, in its literal form is: “not able to occur, exist or be done” and when most people use the word, most of the time, that’s what they think they mean: it can’t be done, no way, no how - end of story.

Manned powered flight was considered impossible until two bicycle repairmen, the Wright Brothers, came along and proved everyone wrong on 17th December 1903. Staying on the theme of flying, and a mere 45 years later, everyone believed flying faster than the speed of sound was impossible, until General Chuck Yeager broke the sound barrier on 14th October 1947. Take note here, scientists thought the sound barrier was so impossible to break, they named it the “sound barrier”. Not the “sound obstacle” or “speed of sound challenge”. No, they called it the sound barrier because they thought it was an actual barrier that could not be broken - and they were the experts!

You see, impossible really means, “it hasn’t been done yet”. “Impossible” has a very clear lifecycle that is easy to spot in just about everything mankind has ever accomplished.

First, something is impossible. Then, someone thinks they can do it, and they succeed at it. This person’s name will usually go down in the history books. The Wright Brothers, Chuck Yeager and Neil Armstrong, the first person to set foot on the moon, were all the first people to do the impossible. You may remember that Buzz Aldrin was the second person to step on the Moon, but can you name any of the other ten astronauts that visited the moon after them? No, neither can I. When it comes to achieving the impossible, being first is important.

Then, that impossible thing becomes “amazing”, which morphs into “wonderful” and “marvellous”. For several years after airplanes were invented, pilots would do stunts at county fairs and were often called “those magnificent men in their flying machines.”

Before long, the impossible becomes fashionable, and eventually common and lastly mundane. So mundane that we forget it was once considered impossible.

The next time you brush your teeth with an electric toothbrush (invented in 1937), or shave with an electric razor (1930), remember that once electricity in the home was considered impossible (1882). To say nothing of a small electric motor with a rechargeable battery. These are such everyday items we don’t think twice about them, but a generation ago, they were impossible.

Prior to Covid changing our world, I heard the word impossible quite a lot in IT in answer to questions like these:

Q: Can my team work from home?
A: No, that’s impossible at this organisation.

Q: Can we conduct User Acceptance Testing (UAT) remotely and from home?
A: No, that’s clearly impossible. We need everyone in the office to do that.

Q: Could we set up a virtual telephony system so people can take work calls at home?
A: Clearly, no, that’s impossible. We don’t have the infrastructure or resources to do that.

Q: I need to visit family on the other side of the country for a month, can I take my work laptop and do my development and software testing from there?
A: Obviously not. We need you in the office. Stop asking for impossible things.

Now, less than a year later we are all quite happily and successfully working from home having achieved a number of impossible things in the process. Whenever we are faced with a new challenge, that could be anything from writing code that does something new, finding bugs in existing code or just changing established norms, often our first knee jerk reaction is to think it’s an impossible task. But really, it’s just a “no one has done it before” task.

How do we continue to support thousands of customers, develop, test and deliver new software and services while everyone is working from home, miles apart from everyone else on the team? Six months ago, that seemed pretty impossible to a lot of organisations. Now, it’s just a Monday.

Accomplishing the impossible isn’t a rare occurrence done by the Chuck Yeagers and Neil Armstrongs of the world. It’s what all of us do all the time when we learn to see beyond the limitations placed on us by other people or the technology of yesterday.