The Fine Art of Problem Solving

I love solving problems. In fact, I like to consider myself to be a natural problem solver. It’s just how my brain works; I see an issue and instantly my mind switches into problem solving mode. And in IT, there are always problems to be solved. 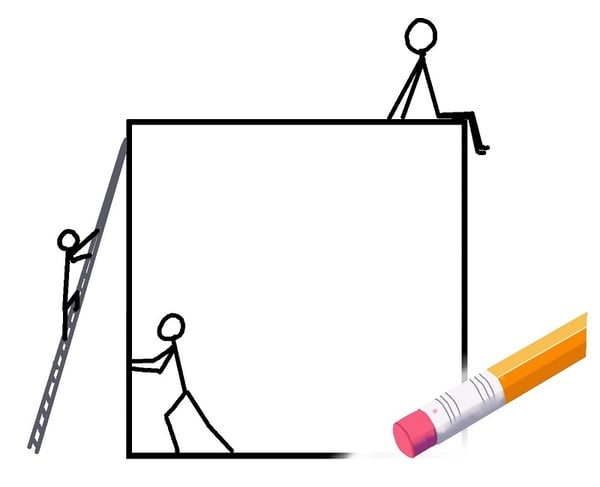 How Do You Solve Problems?
Step 1 is to identify the problem; so, I’m going to start by defining what I mean by a problem.

Certainly, if you’re unable to open a particular application for a project you’re working on, that is a problem. But problems can also be less tangible and more difficult to define, and sometimes, not really even seen as a problem until after a solution is presented.

Think about the IT world before methodologies like ITIL and Agile were created and became common place. One could argue that these types of methodologies solved a problem and made IT departments and development more efficient. But, if you were running an IT department or writing code before using one of these methodologies, were you aware you had a problem? Probably not. Rather, you were doing something one way, saw someone else doing it a different way, and thought, ‘that’s a good idea. Let’s give that a go.’

OK, yes, it is more involved than that, but my point is that a problem isn’t just limited to something being broken that needs fixing. And sometimes we don’t realise we had a problem until someone presents a solution.

The Proverbial Box
There is a phrase regarding problem solving that I hear from time-to-time, although it had its heyday in the ‘90’s. And that phrase is’ “thinking outside the box”.

The online Cambridge Dictionary defines thinking outside the box as: “to think imaginatively using new ideas instead of traditional or expected ideas.”

Notice the words ‘instead of’, which implies you can do one or the other.
As an avid problem solver, I have a major issue with thinking outside the box. A glaring, in-your-face sort of issue that no one else seems to notice. And that is: People who think outside the box are just as limited by the box as people who only think inside the box.

This realisation first dawned on me while working in Civil Engineering in the U.S. Air Force. I was stationed in the U.K. at the time, which is going back a few years to the early ‘90’s. Members in the Civil Engineering Squadron on the American bases I was at were a mix of US military and British civilians, who brought their local expertise to construction projects. Having civilians in the squadron gave us continuity, as the military people would rotate out every 3 years or so. It also gave us in-house knowledge of British building regulations and practices. Every construction project I worked on had a mix of American military and British civilians working on it in various roles from design to project management.

A point of contention that I saw, and often took part in, on a regular basis during my 6 years of duty in the U.K. centred around this issue of thinking inside, or outside an imaginary box.

A typical conversation between an American and their British colleague went like this:
American Airman: ‘Let’s do it this new way, and use a computer…’
British Civilian: ‘We’ve been doing it this other way, and on paper for 20 years, and it works fine. Why change it?’
American Airman: ‘Because that way is old, and the new way uses a computer.’

There are of course several layers to this short conversation. Often Americans like to change things purely for the sake of change, with little or no real benefit other than it being new (and uses a computer). And at the time, we (the American military) saw our civilian counterparts as being ‘stuck-in-the-mud’, resistant to change and always thinking inside the proverbial box.

For a time, I fell into this category as well. A tried and true ‘out of the box thinker’. Someone who liked to change things just because it was new and flashy, and even better if it used a computer.

Eventually I began to realise that change for the sake of change can be more detrimental to a process than making no change at all. Then, I took a radical approach and stopped believing in the box altogether. And that COMPLETELY changed how I solved problems.

What I learned in my Civil Engineering career, is that sometimes the person who came up with a system 20 years ago was an absolute genius. And if we replace their process out of hand with something new, we could actually make things worse.

How To Think Without a Box Limiting Your Thoughts
Whenever I tackle a problem today, I always look at what was done before, and analyse it for the best bits. The elements of the old solution that worked really well, then I look for what can be added to it, to make it work even better. I don’t discount anything!

I will often come up with ten or more possible solutions to a problem, including ‘do nothing at all.’ A few of the solutions will be outlandish, too expensive and impractical. A couple will be purely ‘in the box’ solutions, and some will be purely ‘out of the box’ solutions. And even when I’m making my list of solutions, I’m not afraid to pull them apart and take elements from one and combine it with another to create new idea, or ten. I’m never worried about coming up with too many ideas, or ideas that are too outlandish and break all the rules. As long as, when it’s all said and done, I have one idea that solves the problem.

What are you struggling with right now to find a solution for? Are you trying to do things different when actually nothing is broken and needs to change? Are you discounting something that might work because of your way of thinking about it?

When thinking about a problem and trying to find a solution, try not to rule anything out.

P.S. I would like to add that, it is not lost upon me that not believing in the box, is itself a very out of the box way of thinking. But if it works, go with it.