Digital Transformation, is in my view, a lot like the ocean’s tide. When on a sailing yacht, you have a few choices when it comes to dealing with tides, but deal with them you must. 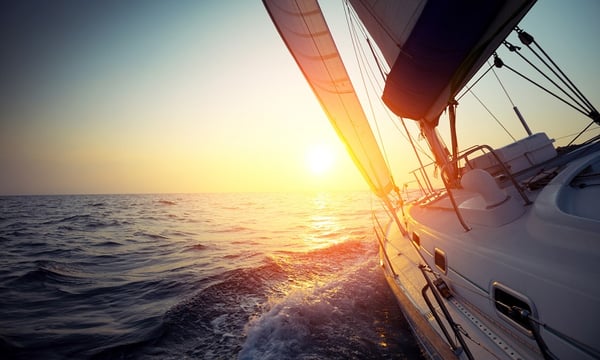 You can point your nose into the tide, turn on the motor and power through them - trust me, this is not fun. You can also drop your anchor and not go anywhere. Sure, the tides will spin you around in slow circles along the coast, but with your anchor secure in the ocean floor, you’re not going to go very far. Or, you can check the tide charts, wait for just the right moment when the tide turns, and let the tides carry you in the direction you want to go. And if the wind is also cooperating, you’ll be in for a lovely, fast and smooth sail.

Technology, like the ocean’s tide, is advancing every day. The question is; are you going to sail against it, stay where you are or go with it? And perhaps more importantly, are you going to be one of the leaders, moving the tides of technology forward?

nFocus have published a white paper on Digital Transformation & Quality Assurance, that is well worth a read for anyone undertaking a Digital Transformation journey. In it, it is mention that “…less than 15% of all European countries are operating at their full digital potential…” In my mind, that translates to 85% of European countries are operating with their technology anchor stuck in the mud.

So, how do we read the digital tides? How do we know what product or technology to move forward on? Easy. We need to check the tide charts. If we look at what the tides have done in the past and we understand the impact the moon has on tides, we can predict what they are going to do in the future. In the technology world, this translates to looking at how people made decisions in the past, and what impact those decisions had on their company.

If you were to ask me what my favourite moment in computer history is, I would say it was when Alan Turing cracked the Enigma code and built the world’s first computer as a by-product. That’s a tough one to top. If you work in IT today, you owe thanks to Turing (IMHO).

My second favourite moment in computer history, however, is when Steve Jobs introduced the iPad to the world.

Now, I appreciate that for some people, Steve Jobs and Apple are a lot like Marmite, you either love ‘em or you hate ‘em. But setting that love/hate feeling aside for a moment, the iPad revolutionised the way we interact with technology, on a global scale.

There are several things I love about the introduction of the iPad and the impact it has had on the world.

First, I love how it merged the best elements from two existing technologies. It took the touch screen from iPhones and made it bigger with (nearly) the processing power and flexibility of a laptop. It opened the App Store up to a whole new range of apps that people around the world could create, encouraging more and more people to learn to write code.

I also love how it totally put reviewers and tech experts into a tail spin when it was first announced. People, especially tech experts, just didn’t know what to make of it or where it would fit in the world of technology. One comment, quoted in a New York Times article written in March 2010 says: “This device is laughably absurd. … How can they expect anyone to get serious computer work done without a mouse?”

It seems, at least initially, techies hated the iPad, but regular people loved it.

What you may not know, and what is my most favourite bit about the iPad release, is that Jobs had the idea for the iPad before he thought of making an iPhone. Here’s a quote from the man himself:

“I had this idea about having a glass display, a multitouch display you could type on. I asked our people about it. And six months later they came back with this amazing display. And I gave it to one of our really brilliant UI guys. He then got inertial scrolling working and some other things, and I thought, ‘my god, we can build a phone with this’ and we put the tablet aside, and we went to work on the phone.”

The above quote was taken from an interview with Jobs at D8 – the 8th All Things Digital Conference held in June 2010. If you have some time, I highly recommend you Google it and watch the interview or listen to the podcast version. It’s about 90 minutes long, and even if you dislike Jobs, there is a lot in the interview relevant to Digital Transformation in today’s market.

When Alan Turing built the first computer, and Steve Jobs released the first iPad, they weren’t just sailing with the tide, they made the tide that thousands of developers and tech companies around the world then sailed on.

Technology is moving and changing faster every day. Tech that was science-fiction in films a decade ago is reality today. For decades, the way we interacted with computers was limited to a monitor, a keyboard and a mouse. Now we wear computers on our wrists, carry them in our pockets and talk to them. And they talk back!

Personally, I’m looking forward to the day when your computer is a contact lens.

How do we make the right decisions so that we are not just keeping up with Digital Transformation, but are the ones moving it forward?

I found the interview with Jobs really interesting because you get to see the decisions he was making nine years ago, and the reasoning behind those decision, and how they have panned out today. And don’t feel like you need to limit yourself to Steve Jobs, Bill Gates and many other tech leaders have been interviewed at the All Things Digital Conferences over the years. Watching some of these interviews from the past is like reading the tide charts.

One of the key elements to making the right decisions, is having the right people to either make them, or provide expert feedback. Jobs mentions in his interview that he wasn’t the only decision maker at Apple, and many of his ideas were knocked down by others who were more expert in the field. This means that if you don’t have the right people making decisions, you may find yourself going against the tide. And maybe contracting in, or hiring, the right people is a good way to turn your boat around.